When my Uncle Bob gave me a truck load of 100-year-old heart pine timbers, I had originally planned to build a glorious farmhouse dining room table (that is still in the works). However, I decided to first build a dining room shelf. I chose to do this for several reasons:

1. I had never built furniture before and a shelf seemed easier.

2. I figured a shelf wouldn’t take as long.

3. The table will require more complicated joints and woodworking techniques. When cutting into 100-year-old timbers that aren’t replaceable, I thought it’d be nice to have some experience.

4. We had several old stairs lying around that needed a new purpose after their staircase was torn down.

Throughout this process, I learned a great many things about woodworking, my tools and their limitations, and my own skills as a do-it-yourselfer. If you’ve been keeping up, you’ve already seen how I increased the depth of the shelves by biscuit joining one stair to a piece of another. That was a really exciting adventure for me, as it was my first major project with my Dewalt router. This tool is proving to be the most versatile tool in my tool kit, as any seasoned woodworker will attest. I’m looking forward to further developing my skill set with this tool. My near future projects include a wine rack for the shelf in this post and the farmhouse table that’s in the works.

After the heart pine beams and stairs had been sanded, the process of building the shelf began by hand cutting the beams to length, 7 feet. I used a hand saw because I wanted to be as exact as possible. Plus, I don’t have a table saw. I supported the overhanging end with scrap wood and some clamps as shown in the photo. This was an important step because the overhanging piece weighs 20-30 pounds and could easily rip off chunks of the beam I’m using if it fell to the ground prematurely.

Sanding and preparing the beams took about two hours per beam. Once that process was complete, I placed the beams and stairs in their places in our dining room to get a feel for how they would fill the space. I also took about an hour to measure each beam at the spots where the stairs would attach, as well as the widths of the stairs in the front and back where they would hit the posts. As it turns out, all four beams were different widths and all four stairs had different dimensions as well. Since I wanted a shelf with standard dimensions from side to side and top to bottom, this presented a measuring nightmare. I set the overall width of the shelf at 42.5 inches and adjusted the depth of each shelf notch accordingly. Of the 16 shelf notches I cut (four shelves, each hitting four posts), none were exactly the same depth. 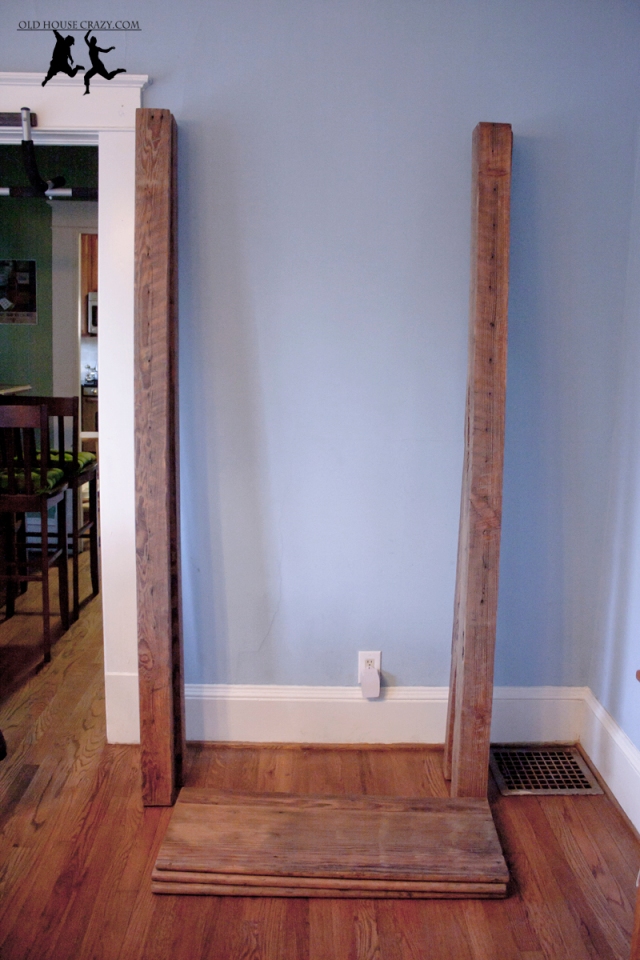 Once I had figured out how deeply to notch each post at each joint, I carried the posts one by one into my basement workshop to make the cuts. For this operation, I used a 1/2 inch wide straight router bit and a plunge base. I also needed clamps, a straight edge, a hammer and chisel to clean up any mishaps, and a knife for etching my cut lines. 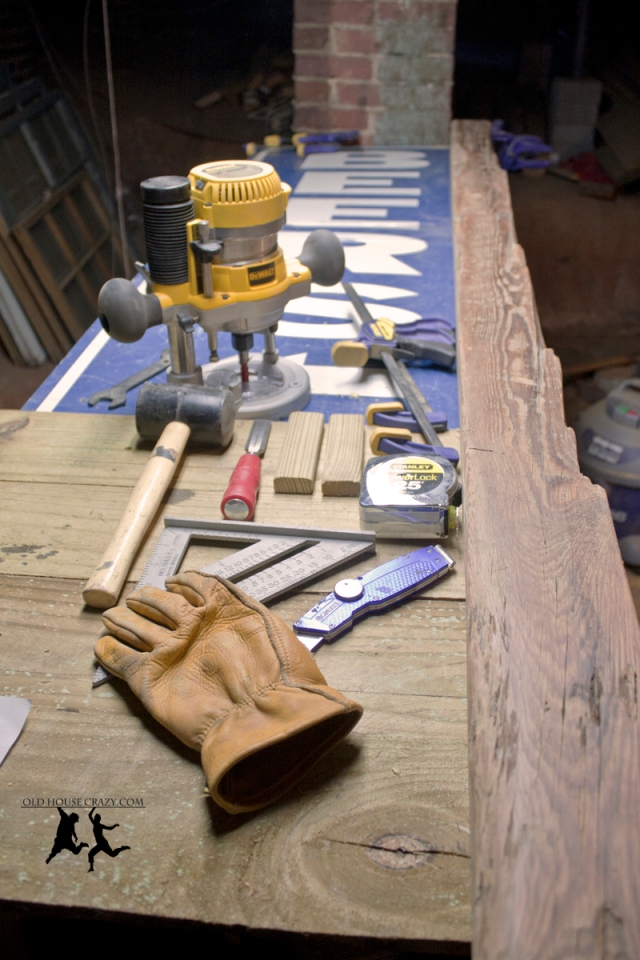 After I marked the top and bottom of the notch, I had to set up stops, or bumpers, for my router. This way, the router would only cut where I wanted it to. It’s kind of like a honey badger: it cuts what it wants. So you’ve got to control it.

Here are both bumpers, firmly clamped to the work surface.

Once the bumpers were set up and the router was ready to go, I made the cuts for each notch in three passes. Even though the bit can cut 1.5 inches deep, it’s never a good idea to cut out that much wood at once. The bit can overheat or damage the work piece.

Having cut sixteen different notches into the posts, it was time to finish prepping the stairs to be used as shelves. I attached the Rockler edge guide I purchased so that I could cut a groove into the back of two of the shelves. This would allow plates to stand up in the back for display.

After cutting the groove in the shelves and notches in the posts, I had to suck it up and actually see if this stuff all fit together. As a first time furniture builder, this step made me really nervous because, if it didn’t fit, I was pretty much a failure. The cuts couldn’t be re-done. As you can see in the photo below, one of the stairs was bowed and needed some coaxing to get into the notches that I’d cut for it.

Other than that, the shelves fit into the notches nearly perfectly. There’s something to be said for carefully prepping for a cut. “Think three times. Measure twice. Cut Once.”

Due to the extremely dense nature of the boards, I had to pre-drill holes before I could drive 10 penny finishing nails into the joints. I then drove two nails into each of the 16 joints. After driving the nails as far as possible with a hammer, I used a nail punch to press them into the shelves so you won’t see them in the finished piece. (Side note: 10 penny nails refers to the fact that you could buy 100 of these nails for 10 cents. 3 penny nails could be purchased at a rate of 100 for 3 cents. 16 penny nails = 100 for 16 cents. The bigger the number, the bigger the nail)

When all of the shelves were attached (This took much longer than anticipated. The heart pine is very difficult to drive a nail into.), the shelf was done. We’ve decided not to stain or coat it, as the wood is gorgeous as it is. We’ll probably add a furniture wax to the wood to help protect it, but no polyurethane. 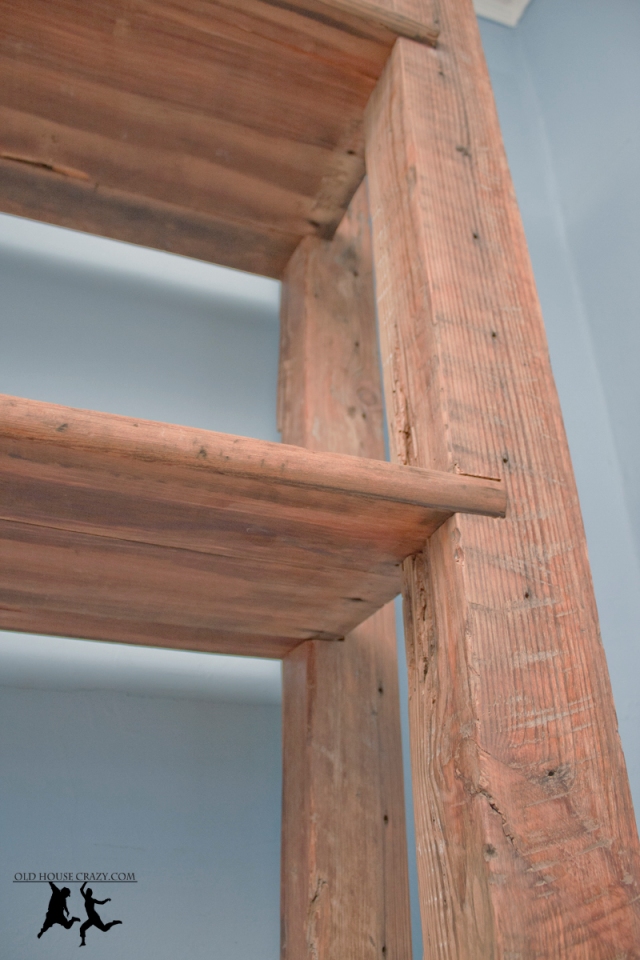 Look out for future posts about stabilizing large furniture and building a DIY wine glass rack. Thanks for reading. -Robby