The farmhouse table for our dining room is complete. It is beautiful. We served dinner to our friends at supper club on Saturday and then Easter lunch to my family today. It has served every purpose we had hoped it would. Before I show photographs of the finished product, which is incredible, I am writing this post to describe how I put together the jigsaw puzzle that is the understructure. I will write a post about the final assembly tomorrow.

As I’ve described in previous posts, I wanted a table that was both functional and beautiful, but that also had heirloom quality in its craftsmanship. I am in no way claiming to be a fine woodworker. My techniques are amateur at best. However, keep in mind as you read the posts about this table that there is not a single wood screw in the entire structure of this table. I did my best to use authentic joinery methods to bring together 100+ year old heart pine beams that were salvaged from old farmhouses. While the joints I created aren’t perfect, they help hold together a one of a kind table that will be in our family for generations.

In part 3, I showed you how I prepped the legs. In this post, I’d like to show you how I used a chisel and hammer to cut mortise and tenon joints to connect the aprons to the legs. Mortise and tenon joints are extremely strong. Look under your dining room table where the legs attach to the aprons (the aprons are the boards that connect the legs under the slab or table top). Do you see shiny hardware? Corner brackets? Wood screws? Chances are, if you see any of that stuff, the legs aren’t mortised.

A mortise and tenon joint involves cutting a slot, or mortise, in the leg. You then cut down the apron so that the end is smaller than the rest of the board and is sized to fit into the mortise. This is the tenon. By using this joint, you greatly increase the surface area of contact between the two table parts. This allows you to apply glue to a greater area and strengthen the bond between the parts. This joint never loosens or wobbles (if properly constructed).

If you scroll up a bit, you can see a series of five photos that illustrate the method I used to cut the eight mortises for this table. I purchased a mortising chisel that was exactly the width of the mortises I wanted to cut. After marking the location for a mortise, I placed the chisel just inside the area I wanted to remove. A swift strike with my rubber hammer cut a groove in the surface of the wood. I then moved the chisel about an eighth of an inch further along and struck it with the mallet again. By leveraging the chisel I removed a tiny bit of scrap wood. I continued this pattern until I reached the end of the mortise. Then, I turned around and went in the other direction.

I repeated this process until I had dug out an inch-deep mortise. The mortising chisel is incredible at creating a mortise that is perfectly straight-sided.

It’s important to note that I cut each mortise before I cut the tenons. Think about this for a second. It’s much easier to make a tenon smaller than it is to make a hole smaller. It is for this reason that I purposely cut the tenons too big by at least 1/8th of an inch in both directions. You can see in the photo above that I made a few marking errors. Measure three times, check twice, cut once. 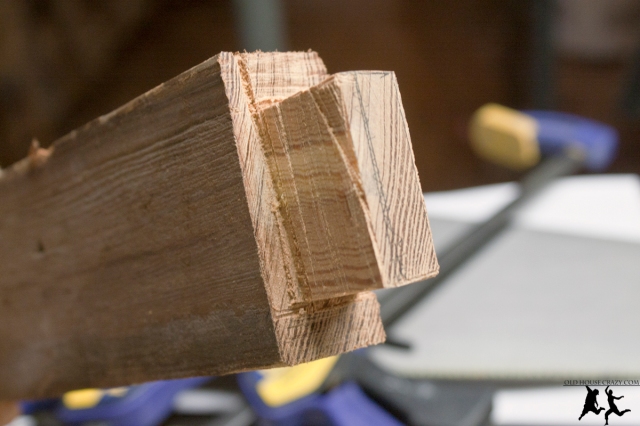 I used a hand saw to cut the waste away from the tenons. It was a pain. I really wish I had a thousand dollar table saw with the workshop space to use it. But for now, by hand is all I have and it’s how people have built furniture for centuries.

Once the tenons were cut, I used a chisel to remove paper-thin pieces of wood until the tenons barely fit into the mortises. I still had to use a mallet to force the joints together, but not so hard that I couldn’t remove the tenons to apply glue.

The mortise and tenon joints that I cut for this table are not perfect, but they are still stronger than corner brackets.

Once I had all of the mortise and tenon joints cut and adjusted, I cut large mortises for the framing boards and the stretcher that would extend between the legs of the table. I did that by cutting several grooves with the circular saw and chiseling out the waste.

I felt like I was cheating by using the circular saw, but I was le tired and needed the table done by supper club. 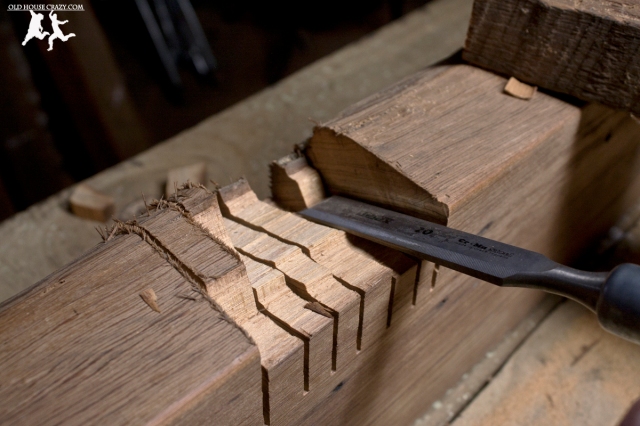 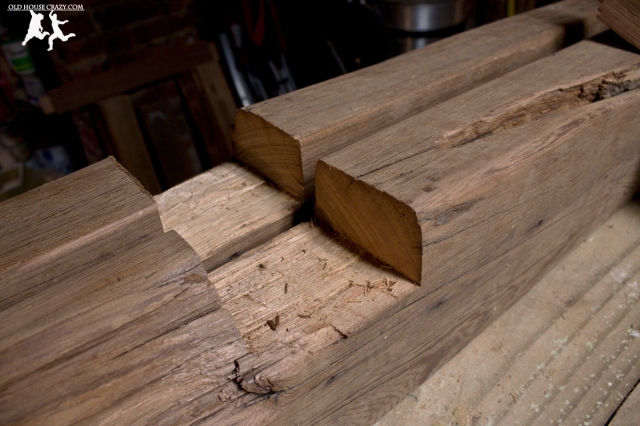 The final photo I’m including with this post shows the understructure of the table fully assembled in my crawl space laboratory/workshop. None of the joints were glued and it was held up using ratcheting tie-downs from my pickup truck. My next post will include the fully assembled table. Thanks for reading – Robby. 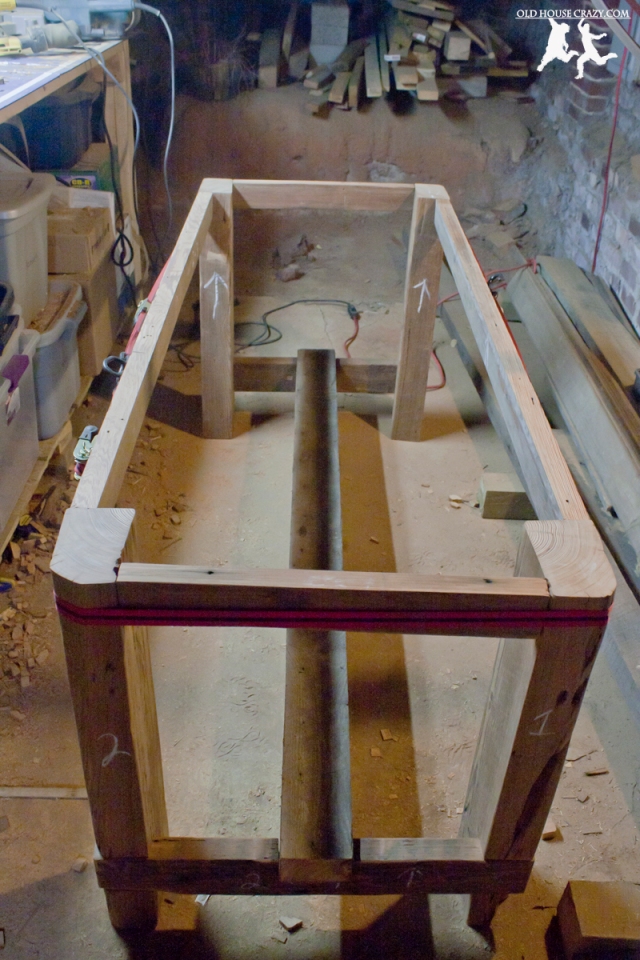