Christy and I really enjoy taking and sharing photos. One of the first things we put up in our house was a wall of photos in the dining room. I think that project was the first time I realized just how crazy it was going to be to own an old house. I figured I’d just hammer in a few nails and hang some photos. HA! By the time I got done, I’d used several nails, a few screws, some of those hanger things, and several choice curse words. I’d found plaster, drywall, and several studs where there shouldn’t have been studs.

As any new homeowner knows, your first instinct is to get things up and out so that your new house feels like a home. Our dining room photo wall was a good example of that. Along with the photo wall, we threw in an old hi-fi my folks bought in 1971, a fold up plastic dining room table (with a nice tablecloth), and some mis-matched oak chairs we picked up at an auction. 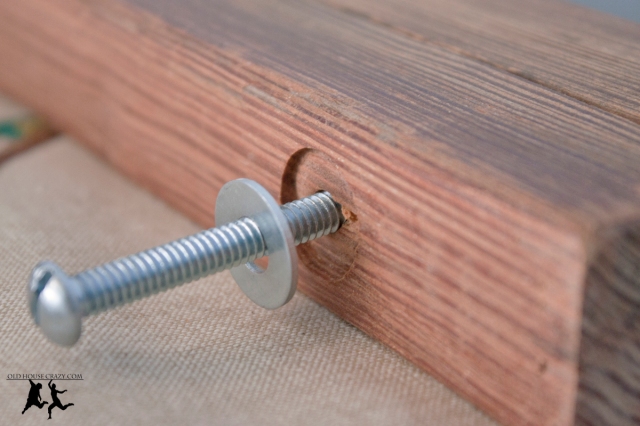 If you’ve been following us for a bit, you know that we’ve recently made some substantial upgrades to our dining room, including a 7-foot heart pine shelf and a heart pine farmhouse table. With these new additions, we really felt that we should also upgrade the thrown-together photo wall with a better, more grown-up arrangement.

Several of the bed and breakfasts we’ve stayed in have used shelves or long hanger bars to display their photos. This is a style that Christy and I really enjoy, both visually and for the ease that it must allow for changing out photos and frames. Have you ever tried to swap out an 8×10 for an 11×14 in a wall where you’ve got all the photos up with nails or hangers? It’s a logistical disaster. By using a shelf, we think swapping out photos or frames will be as simple as picking one up and sitting another down. 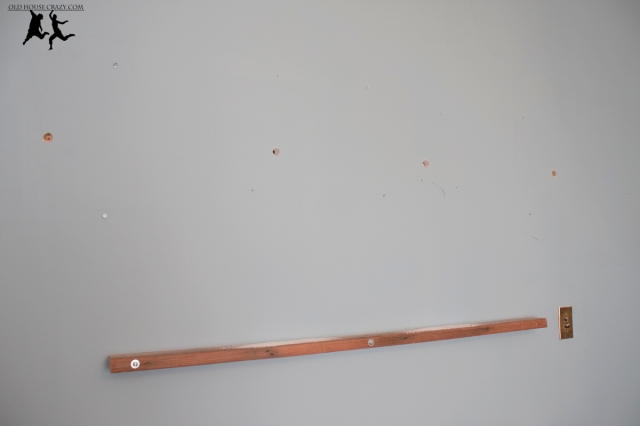 The shelves are made from 1×1 heart pine scrap that was cut off of the aprons during the construction of our table. (Here’s another example of why men save scrap wood. We really do think we’ll find a use for all of it. Sometimes we’re successful. Many times we’re not.) One of the boards wasn’t going to be wide enough to support the frames without them falling down every time someone walked by, so I screwed two boards together using coarse thread drywall screws. I know this isn’t drywall, but they hold really well and they’re what I had. I screwed the boards together from the side facing the wall so the screw heads won’t show. This way I can tell people I used biscuit joinery or glue or something else fancy at parties. 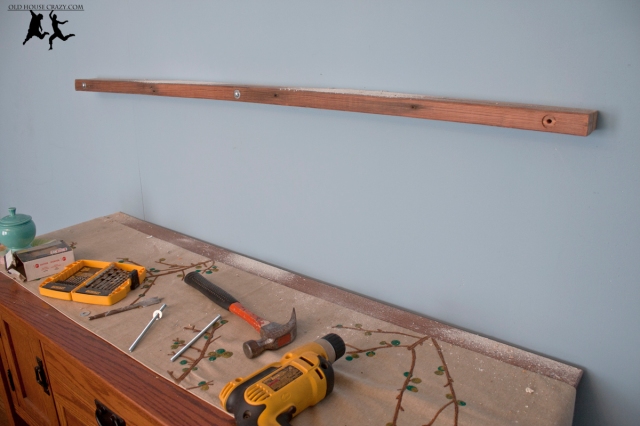 I know you want to show your wife what you’ve accomplished as soon as you’re done. Control that urge and clean up your mess first. The ladies don’t like to know how dirty you got the runner.

After I’d assembled the shelves, making sure that the top edge was perfectly flat and flush, I sanded using 60, 120, and 220 grit paper so they’re nice and smooth. I knew I was going to use 6 inch machine screws and washers with toggle bolts to mount these to the wall, so my next step was to cut a hole the same width as the washers so they’d sit flush with the front of the shelf after mounting. If you haven’t got large diameter drill bits, up to 1″, make an excuse and buy some. They’re wicked cool to play with. Once I’d drilled holes for the washers, I drilled 1/4″ holes through the shelves so that the machine screws would pass all the way through and into the wall. Once these all fit and I’d put away the tools, I carried everything upstairs to attach the shelves to the wall. That’s where the fun started. 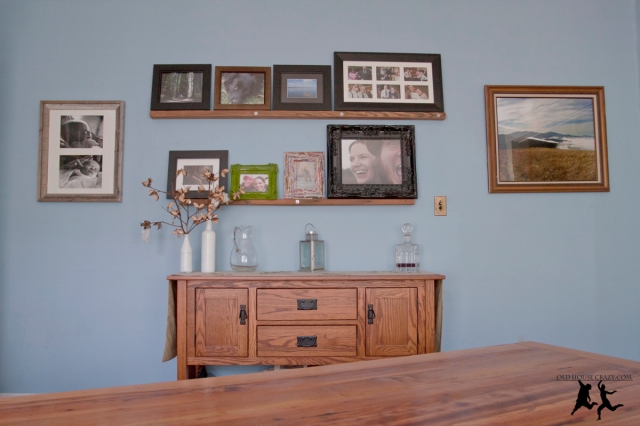 The hardest part of any job where you’re mounting something to a wall is lining it up straight without drilling too many holes. Have you ever gotten everything up just in time to realize it was crooked? I have. For this job, I held the shelves up to the wall using a level to make sure it was straight. Once I was happy with the placement, I tapped each machine screw with a hammer. This left a nice round indentation in the wall exactly where the screws should attach to the wall. GENIUS. I drilled the holes, slid in the toggle bolts, tightened with a screwdriver, and done. Nothing to it really. Thanks for reading -Robby